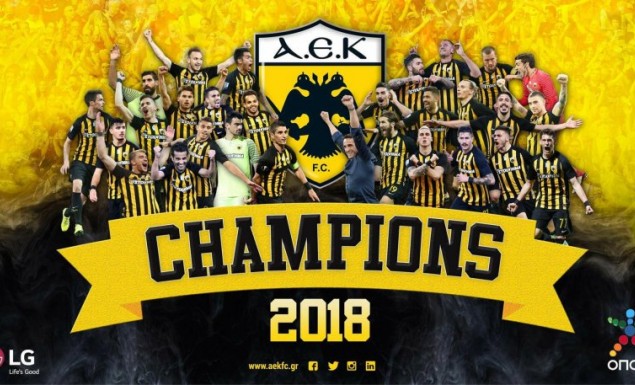 The most tidy team in the league today is AEK. Whoever does not see it, whoever does not know it, let him know. Useful information. It is a team that is firmly on all levels, not just competitive. It has been obvious since he was back where he was. The issue broke out, or rather it was set up in the square because, he says, AEK did not make any transfers. And so, he says, there was disappointment in the team's world. But why does PAE AEK operate "conservatively", why is it careful not to step into potholes? Why doesn't her boss, a financial tycoon, world-class, show off his wealth through football?

Don't forget. What AEK did in the first place was experienced by AEK and twice. One before Demi Nicolaides and another before Demi Nicolaides, with the consequence of leading, racing (!) In the relegation squad and in the 3rd National. Suspicious, and certainly dangerous, is the big shareholder who puts his hand in his pocket. It doesn't make it out of ... love for the ... club. Another intention is to hide it when playing it with a hoodwink. At the finale, what a great group to hang on today's owner's testicles, tomorrow look for a jailer or go where he came from.

Sleep in a PAE depends on its boss. He needs it, and when he does, he leaves a burning earth behind him. We've eaten it on the map. To all (!) The teams. Olympic, Panathinaikos, AEK, PAOK, Mars, Panionio.

What a trick it is launching, that ... people were disappointed because there were no transcripts. I don't know of any group in the world that was disappointed with the president's fortunate transcriptions. Never have people asked for explanations of the catastrophic, militant and economic policies of the president's transcripts. This is the nature of the world, to ask, only to ask. The president, however, has to rationalize as far as the team layer is concerned, which is not only a team but also a limited company.

Even if AEK is not a great team in terms of competition. Even if it's not the best in the league. But they are a working team. With beginning and end. Even if he doesn't play great, exciting football. He scores, though. And it is not at all easy for the opponent to score a goal, even the one who also makes a championship, even a European team (photo from 2 - 1 against Celtic). What does all this mean? How surprising it would be for this serious, neat shop to make a transfer for the. Transfer. For the headlines.

This AEK requires, it is justified to transfer only with the player in need. Why get a player who has not rated him ready and worthy directly in his own skeletal frame? So what, to transcribe and confuse a dozen and a bench? Then there is the other. Transfer not only according to her needs but whatever her finances allow. AEK is, not Milan and Liverpool, nor Ajax and Benfica. Companies that play in better markets, not in the local championship, with measured beans revenue.

Conclusion. Who deals with the transfers that AEK did not make. This is where the disinformation but secret service project from the CIA to Mossad rages. Underground war of disorientation and impressions of the top teams. Let's see until they reach the 4th game, in the… friendly of Toumba with PAOK and AEK.