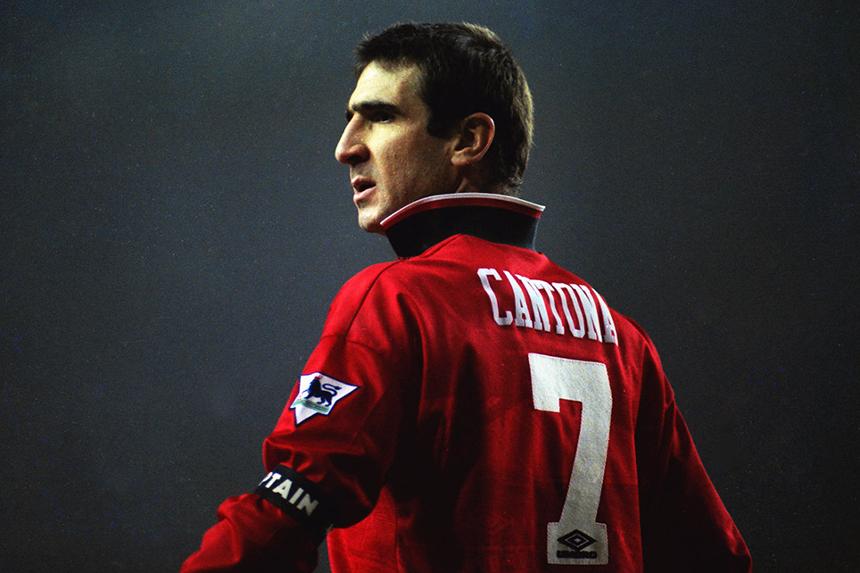 Eric Cantona could be Marlon Brando of football! Not for his charm but for his ability to play. Just like that. Simplicity is the last step before immortality and Canton conquered it by staying upright. Standing, ardent, responsible, proud, with a look that captivated admiration, respect, and acceptance. Everything looks like Brando's. The "unthreatened", the absolute idol, was unpredictable, unruly. Not convinced he can play. By the time he got to the plateau, the lights were on and the director gave the order. Then, only awe and admiration. Surprisingly for talent size and apostasy without sparing. Brando knew, he was sure, and the surprise didn't come as a surprise.

The stand up collar!

Even at his peak, Canton had something to challenge, deny ... However, even the last and most fanatical challenger, as soon as the referee gave the order, stayed. And if it was a reaction of selfishness, in the end recognition, acceptance remained. Forever. Canton knew, he was sure, and one day in December - no matter the year - he just confirmed it. How; He lifted the shirt collar, stood and looked at the crowd celebrating yet another goal. Despite the distance, despite the crowds, he saw the worship and joy he gave to the faces of his ultimate judges: the fans. It was the moment when his hysteria was "born", formed, "walked". It was the moment when a living idol conquered immortality. After that, the French had won the world and most of the time.

He was born in May of 1966 in Marseille. His father a nurse and his mother a seamstress. The second of three children in the family. The other two were Jean Marie and Joel. His first band was “SO Caillolais”. The team's then president, Iv Sikulo, claims that from a very young age, Canton knew he would become a star. Exaggeration obviously, but the picture, even at this age, doesn't lie. The difficult thing is to chart the course, the cavalry journey. Canton was influenced by the "Integrative Football" of the Dutch, and especially by its leader, Johan Cruyff. He struggled with passion, but also with simplicity. His father's advice guided him. "There is nothing more stupid than a footballer who thinks he is more needed than the ball." At 14 he stood out from the rest of the kids and didn't hesitate to become a Guy Rowe player in Auxerre.

On his 22, Auxerre didn't cover him, so he decided to move to Marseille, his hometown. It was supposed to be a triumphant return, but Canton was not in good shape. From that he lost his place in the National to Henri Michel (federal technician) and lost control. He got upset, scolded Michel and made himself available. His club did not support him and this was a turning point in his relationship with French football. He felt they didn't love him, he felt misunderstood, alone.

In Montpellier, when a teammate accused him of disappointing his team, he threw his shoes in the face. Half the team wanted to kick him out, the other half wanted to stay. He stayed and helped the club win the cup. He returned to Marseille and 1991 moved to Nimes. Nimes, however, did not live up to his ambitions and soon the frustration became anger. In a game with St Etienne, he threw the ball to the referee after he found that he had been booked for a foul. The football authorities called him an apologist and imposed a four-match ban on him. Punishment may not have been severe, but previous offenses would always be a lever and a way of attacking it. When he complained, the disciplinary chairman reprimanded him. Canton showed no trace of remorse and, angry at the injustice, he treated the committee members with one word: "Vlakas", Vlakas "," Vlakas ", Vlakas", "Vlakas". France would never accept him. Let it be. If it was intended for a king, it could only be done in England ...

The 1991-92 season is historic for English football. It is the last time the 1 category has been renamed to the Premier League, the one in which Leeds won the championship, the one Eric Erik Cadona introduced to the English public. And it was recommended from the beginning as it should be ... As in Canton. Sheffield's insistence on trying more than initially agreed to, brought the reaction of the Frenchman, who refused. Beyond that, with Michel Platini guaranteeing him, the transfer came to Leeds. On 8 February 1992, in opposition to Oldham, the Frenchman made his debut with the team that believed more and more each week that, yes, he could win the title. And he conquered it. A huge success, however, in which the contribution of Canton was not as great as it has been to the outside, as it has been imprinted on everyone's mind. From February through May, he started only six games in a row, scored only three goals, but gave several more assists and mostly gave everyone the feeling he was coming. That would make it clear with the start of next season, 1992-93, when he made a hat-trick at the Charity Shield against Liverpool, when he scored one goal after another in the league, when he felt he was the team's ... boss. But above all, it was the season in which Cantona would make a move to Manchester United before the Christmas of 92 came. “I had a bad relationship with Wilkinson (Leeds coach). We didn't perceive football the same way, ”said the Frenchman, who had already become a fan of Elland Road fans. And seeing how things turned out, the observer can only draw one conclusion: Canton became a champion with Leeds, not for Leeds, but to show everyone that it would be him who would change the history of English football with the jersey. of Manchester United.

In his five years at Old Trafford, the Frenchman scored several goals, made so many more, lost several defenders, often knocked out his teammates, celebrated four championships but, above all, filled the stands with French flags at which was imprinted on his face. "It simply came to our notice then. He raised his chest, raised his head, looked at him in that familiar style, and it was as if he were asking, "I'm Cantona." How great are you? ” That was Eric, "Ferguson once said, wanting to emphasize how this arrogant Frenchman was not only good with the ball on his feet, but also in raising those around him with his presence. He was a leader and the leaders, as the Scottish coach would later find out, do not follow. They chart their own course and listen only to their own conscience. When Cantona announced his decision to end his career in 1997, at the age of 31, he shocked everyone. Legend has it that his decision was gladly accepted by Ferguson, who realized that the best years in France had passed, but did not want to oppose him because his fans adored him. As smart as "Fergie" was, Cantona caught up with him. Because if he didn't, what would King Eric be like?

The legend wants Eric Cantona to kick-start Matthew Simmons, a Crystal Palace fan, in January of 1995 as the highlight of his career. “My best moment? I have many, but my favorite is when I kicked the hooligan, ”the Frenchman allegedly said. Even if we are dealing with something that has never been said, the blow is in itself a loud statement and manifestation of its character. Wrong move; Error. Fake; In no case. "Kung Fu kick" belongs to the notion of English football. From the countless pictures - points - produced daily by the Premier League, she has passed on to anthology of separate, unforgettable images. Its analysis is important because it addresses the core of the football world, namely the viewer's relationship to the outcome and the one who produces it. In addition, it helps to identify (and understand) Canton's way of communicating with the sport and the public. The public in need of the sport, because without it, there can be - essentially - no existence.

The showdown at Selhurst Park, home of Crystal Palace, mattered, as the Red Devils would return to the top of the standings with a win. Canton was the easy target for opponents, footballers and fans. Easy because it wasn't hidden. From the athletes because of his raw talent and his unrestrained expression and from the fans because of his character. Canton was the player you loved to hate. But everything has a limit, and Richard Shaw was the one who tried to touch it. Paul's center-back undertook to brand the Frenchman, and probably did so. Sir Alex Ferguson, in his autobiography, has said that "the inability of Alan Wilkie (referee) to stop the shameful treatment by the two central defenders has made their troubles inevitable".

Time stops at the 48 minute. Seo is claiming the ball after a volley from Smihel, a United goalkeeper. Comes in contact with the Canton, the Frenchman kicking him on the nerve. He receives a red card and travels with a United man to the locker room. Suddenly he stops and turns his attention to the stand. His gaze was electrified and everyone in there knew something was going to happen. Simmons has gone down the aisle and detained Canton. All good up there, controlled. But the moment he called his mother a "French prostitute" no one could hold him.

The team fined the player four months in jail and a fine of 20 thousands of pounds. The Football Federation, however, extended the ban to nine months and added 10 thousands of fines. The case reaches the Pacific Court. Canton pleads guilty and judge announces sentence: two weeks in jail! In fact, the sentence had to be executed immediately! Those in the room were amazed. No one expected such a development. At one point Canton was free and the other was being led to the cell! The United Nations legal team immediately filed for a guarantee and this was rejected. They were then turned to a higher court (Crown Court) and lodged an appeal and demand for bail. The judge authorizes bail and sets the appeal next week. Canton was again free after three and a half hours. The Frenchman complains that the peace decision is "incorrect and contrary to Parliament's will". Finally, he is sentenced to 120 hours of social work. United organizes a press conference and then Canton says his famous enigmatic phrase: "When seagulls follow the trawl it is because they think sardines will be thrown into the sea."