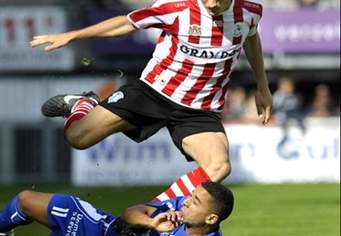 # At marginal levels, the ace of Panathinaikos "bite" the tie against Olympiakos, he is gaining momentum, he wants a sacrifice at all costs for obvious reasons;

# Steadily in the bay of Europe, Odd is running 3 consecutive victories, scoring as much as possible; it does not say to raise its head, Valerenga happily reached 9 matches without a three-pointer.

# Home, momentum form all in favor of Schalke remains to prove it in practice… black carpet Cologne (5/6 losses with 15 goals passive) goes straight for the tassel.

# Slightly better defensively, Heracles is 3 points away from the 5th easily or will hardly find a way to drill… 3/3 defeats except Emen is looking for a lifeline.

# From a position of power, Valencia has European obligations and wants to make up for the heavy defeat by Ajax in the middle of the week in "Mestagia"; the third reason in the meeting, Alaves remains without a three-pointer since mid-March.

# 4 consecutive draws Heerenveen's time to celebrate the first victory in front of its audience; poor Tsvole away record has a record of 1-0-3.

# Better than expected, Sparta in 8 matches has gained 12 points, plays with the advantage of the synthetic carpet; at a safe distance from the zone, Twente loses 2 in a row.