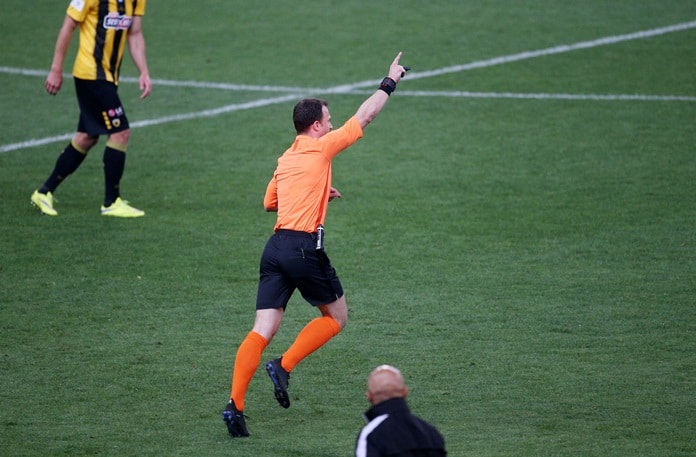 The inauguration of the use of VAR in Greece was combined with its use by the German referee in the phase when the ball hit the hand of Kanye. The two referees of Master Ref, K. Akridas and Herpes. Chikinis say it was a difficult phase, but they think it could be a penalty shootout, and they are positioned on the effectiveness of VAR.

"In general we had good refereeing, but in a game with no meaning, no world, nothing ...

The only difficult phase of the fight was the hand of Kanye. For me it's a 70-30 penalty, because yes the ball hits the foot first and then the hand, but the PAOK player's hand is not in the normal position and it changes the course of the ball.

The VAR as it seemed did not help the referee change his mind. This phase has shown that VAR is not a panacea and it will not be easy to quell protests and passions. First of all there must be good faith. If he were a Greek referee and did not give this shot we would have terrible problems and let VAR exist. Unfortunately in Greece there is terrible mistrust and I am very afraid that it will not change anything with the VAR, due to the Greek… culture of protest and suspicion. I don't want to be a badass but I don't see VAR in Greece as in other European leagues.

Overall, Schweier seemed to me slow in his whistles, didn't whistle immediately, had no color on the hard and simple foul on his whistle. His whistles ranged from simple to hard fouls. Only in one phase did it appear to have power when 2-3 AEK players protested for the penalty shootout and went on to grab PAOK players. He came in the middle and he seemed to have a fist and he was strong.

Otherwise there were no other difficult phases of the match, the players did not cause any problems, there was no crowd on the field, in general it was just a good referee, with the exception of the penalty shootout, where I think his persistence was wrong despite seeing VAR. .